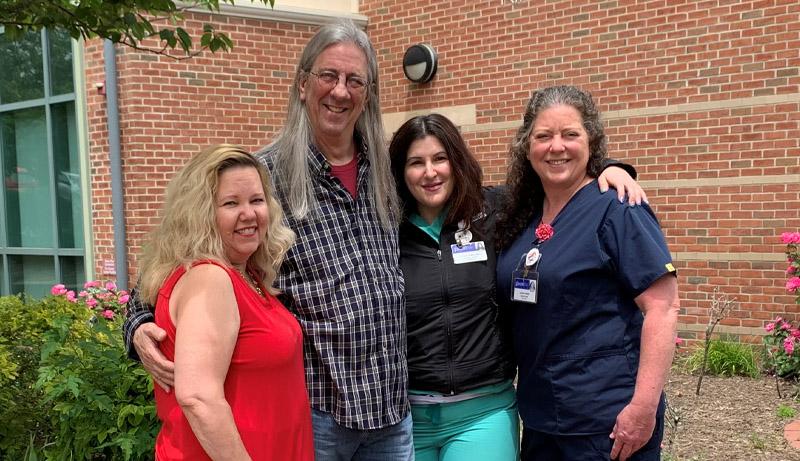 Music has been 64-year-old Jim Kelly’s passion for as long as he can remember, and it’s taken him on some incredible life journeys. He received a master’s certificate from UCLA Extension in Music Business Management, where he learned from some of the best in the business including the manager for Van Halen, Bob Dylan and Bon Jovi. He toured with country bands, was the Chief Operating Officer for record stores in Arizona, and was a music executive with Warner Brothers. Eventually life and work led him back to New Jersey, where he later left the big time music scene and instead opted to split his time between working at a local music shop, playing in bands and reselling instruments. Finally, in 2018, with his wife Vicki’s full support, he formed The Locals, a dance-rock band that stays true to its name, playing mostly at bars and clubs in South Jersey, with Jim as the drummer.

Like most local musicians, Jim’s work skidded to a halt when the COVID-19 pandemic hit, but eventually, The Locals started back up again playing outdoor shows. It was on the way to one of those shows on July 4, 2020 when Jim’s life took an unexpected detour, one that eventually led him to Shore Cancer Center.

On the way to the show, Jim began feeling pain in his abdomen, which he figured was his diverticulitis acting up. He went to Shore’s ER like he had four times before for the condition, but instead of sending him home with antibiotics like usual, they kept him several days because they thought he had an infection. They ordered an MRI, which surprisingly revealed a lesion on his 10th rib, so Shore ordered a biopsy and soon after Jim was sent home.

A few days later, Jim heard the shocking news – he had stage IV lung cancer, and the lesion on his rib was a metastasis from his lung tumor. Knowing the severity of his diagnosis, he was relieved to get an appointment right away with Penn Medicine Pulmonologist Dr. Upendra Dhanjal at their office on Shore’s campus to confirm his cancer diagnosis. Dr. Dhanjal then recommended he go to Shore Cancer Center, a member of the Penn Cancer Network, as soon as possible for treatment.

Vicki’s previous husband battled cancer, so Jim had someone by his side with experience to help him navigate those early days and decisions. Jim’s diagnosis was very serious, but right away they both felt confident in the expertise and compassion of the Shore Cancer Center team.

“Within a day or two, I had an appointment with Hematologist Oncologist Dr. Mylene Go at Shore Cancer Center. Vicki and I were enamored with her from day one. We appreciated how she wanted to have all the science and facts in front of her before she made any decisions about my treatment,” Jim said.

“After a CT scan and PET scan, Dr. Go and Dr. Tiffany Pompa came up with my treatment plan, which consisted of a chemotherapy and immunotherapy infusion every three weeks from August to January. It was really difficult and took a lot out of me. The goal was to get me to a point where I could have lung resection surgery to remove my primary tumor,” Jim said. “And they did. I had surgery at Cooper in January to remove my tumor along with 5% of my lung, and thankfully all of my lymph nodes were clear, too. Then I had radiation to focus on the lesion on my rib. Again, my radiation oncologist Dr. Shah was phenomenal. Looking back, everything they suggested at every turn of my treatment, they were right.”

Vicki couldn’t have been more pleased with Jim’s care at Shore Cancer Center.

“Every person we dealt with was so welcoming and kind. It felt like everyone knew us and was invested in Jim’s care, from the woman at the front desk to our nurses and oncologists. From our second appointment, they all remembered our names.”

Jim added, “They really are concerned with my wellbeing, not just my medical health. I enjoy talking with them about my treatment. They speak to me respectfully. If they don’t know an answer to a question I have, they find out right away. My entire care team talks to each other regularly about my treatment and they all know what’s going on. That’s really important. We’re talking about my life here, not my tonsils. They seem to have a very specific plan of attack, which I have a great deal of respect for.”

With every cancer treatment, there’s always the risk of complications, which Jim did experience once when his platelets dropped too low and he had to receive a blood transfusion. Even then Jim was amazed at the skill, empathy and compassion with which he was treated by his team.

“Vicki wasn’t allowed to visit me when I was hospitalized, but my nurse Laura Freire, Dr. Go and Dr. Pompa all came to visit me in the hospital. That meant so much to me,” Jim said.

Nearly one year since the start of his lung cancer journey, Jim is back playing in shows, doing yard work with Vicki and looking forward to spending time with their grandchildren. He is still on Keytruda and has another scan this month, but he’s feeling great and is confident he’ll keep doing well with his Shore team – and his family – by his side.

“Maya Angelou said ‘the only way out is through’. It’s the truth. If you have to walk through hell, walk through it like you own the place. I kept telling myself all you have to do is get through to the other side. My wife, mother, my kids – they all convinced me to go through treatment, because I wasn’t going to do it at first. Everything worked, and I’m so glad I listened to them and went with Shore Cancer Center. I owe them my life.”