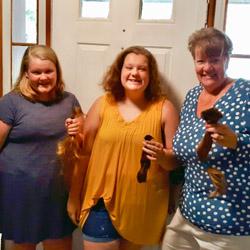 It is expected that Shore Medical Center team members offer compassionate care to patients and their families. But for some of the team members, like Nurse Manager Jen Pero, MSN, RN and Unidine Guest Services Representative Kristen Battisti that compassionate care goes beyond the walls of the hospital and is woven into the fabric of their daily routine.

Jen Pero, along with her daughters Olivia and Sophia made helping children battling cancer and dealing with the loss of their hair a goal. The conscious decision to let their hair grow long with the plan to donate their trimmed tresses to Locks of Love was a group effort. Leading by example, the Locks of Love donation this year was Pero’s fourth and the third for Isabella and the second for Sophia. She said the girls voiced their interest in wanting to help kids who lost their hair because it was something they could do on their own.

Just before the start of the school year the girl’s hair was long enough to make the donation. With their hair pulled back into ponytail, snip-snip and all those months of growing their hair was behind them. Jen Pero was able to donate a 14” ponytail while both her daughters donated 8” lengths.  They all received a certificate from Locks of Love, thanking them for supporting the mission to help children suffering long term or permanent hair loss. The Pero family is also involved in fighting food insecurity with Rise Against Hunger and donating books to hospital lobbies and waiting rooms to name just a few of their charitable efforts.

Kristen Battisti allowed her hair to grow for seven years with the plan that she would eventually donate it. She had donated before and the ponytail was 10 inches but said she really wanted it to be more and to be able to donate hair for a long wig. Mission accomplished-after growing for seven years she was able to send off two 22 inch ponytails to Children with Hair Loss-Wig Studio to be made into a child’s wig.

Battisti said, “Hair is such a personal thing. I can only imagine a child feeling self-conscious about not having hair because of a sickness. It’s not a big deal to me but it could be a big deal for a kid that has been sick and now looks different than other kids. I hope the person that gets the hair will enjoy it as much as I did,” said Battisti.

To underscore her commitment to provide a special gift she sent a letter along with her ponytails.

I hope receiving this wig made out of my hair gives you as many adventures as I had while growing it out the last seven years. Since growing my hair I have had two nieces and three nephews born. I have been to many birthday parties and special occasions. I even had it moving in my first apartment. I also had it during one of the most special times, meeting my dog Laney. I wish you many happy times and moments as well. I wish many fun wishes for you in the future, Best of luck!