Dietitian Dish: Add More Flavor to Your Food with Umami 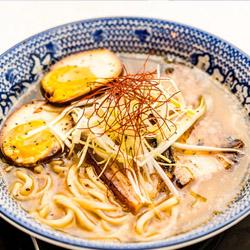 Most of us are familiar with the four types of tastes: sweet, salty, sour, and bitter. There is, however, a fifth taste that the Western world is just beginning to embrace. This taste is called umami (pronounced o͞oˈmämē).

Umami is a Japanese word meaning “savory, pleasant taste.” But it’s not just a flavor for which someone created a word. Umami actually refers to the taste created by glutamate (or glutamic acid), an amino acid naturally found in meats, fish, vegetables, and even dairy. The umami flavor develops when the glutamate starts to break down during the cooking or aging (as in cheese) process.

Although glutamate is naturally found in foods, we have also found a way to commercially produce the umami flavor. This is done through the use of monosodium glutamate (better known as MSG). MSG is produced through a fermentation process and sodium is later added. MSG is added to many processed or prepared foods to create the umami flavor. You can also buy MSG at the grocery store to use in your own cooking.

You may be hesitant to use MSG in your cooking through, because MSG has been vilified as an unhealthy additive. However, there is no difference in the chemical structure of glutamic acid in MSG and that which is naturally found in foods. It is hypothesized, though, that the glutamic acid in MSG is easier for your body to absorb because the glutamic acid isn’t stuck in a big protein molecule as it would be in natural foods. Once glutamic acid is absorbed, it acts as a neurotransmitter, exciting nerve cells to relay a signal to the brain.

Many people believe that excessive glutamic acid can overexcite the nervous system, resulting in various symptoms such as headaches, numbness, or tingling. It is important to point out that most of the beliefs about MSG reactions and sensitivities are based on anecdotal evidence only. Scientists have been unable to consistently trigger reactions in research studies. In studies where participants did have any type of adverse reaction, the dose of MSG was much higher than the average daily intake.

If you don’t want to use MSG but still want some of that umami goodness, you can achieve that by using certain foods in your cooking. Foods such as seaweed (a rising superstar in the food world – check out next month’s article for more!), mushrooms, cheese, tomatoes, and garlic can increase the umami factor in your homemade dishes. Drying or aging increases the glutamic acid content in foods, so dried mushrooms have higher glutamic acid content then fresh mushrooms. So give your dishes an umami twist by adding a few of these ingredients.

Carbs Do Not Have to be Your Enemy

Pep Up Your Summer Produce with These Pointers