Is Pregnancy and Exercise a Healthy Mix?

Being pregnant can bring on a roller coaster of emotions and enter moms-to-be into a minefield of well-intentioned but sometimes confusing and contradictory advice from family and friends. Every expectant mom wants to do what is absolutely best for their baby and for their own health but managing what is sound advice from what might be potentially harmful can be difficult.

Follow Doctors Advice
Whether to exercise or not during pregnancy is one of those topics that just about every person will offer an opinion.  Dr. Robert H. Debbs, Professor of Clinical OB-GYN, Perelman School of Medicine, University of Pennsylvania and Director of University of Pennsylvania Maternal Fetal Medicine Network weighed in on expectant mothers and exercise. “We advise most women to continue non-contact sport exercise during pregnancy,” said Dr. Debbs. “It improves outcomes like lower cesarean rates and less macrosomia.”

Fetal macrosomia is the term describing a newborn who is significantly larger than average. According to mayoclinic.org a baby diagnosed with fetal macrosomia has a birth weight greater than 8 lb. 13 oz. or 4000 grams regardless of their gestational age.

Know the Limits
Dr. Debbs added that some adjustments are recommended like keeping the expectant mother’s heart rate less than 150 while exercising. He also advised that all women with a potential high risk pregnancy should consult their obstetrician.

For three expectant mothers, all with Shore Physicians Group: Dr. Lisa Iucci along with Advance Practice Nurse Amy Riordan and Physician’s Assistant Elizabeth Klein, exercise is an important part of keeping themselves healthy and preparing for the arrival of their babies.  All three of these health care professionals took part in a spin class for Shore Medical Center staff at Greate Bay Racquet and Fitness. 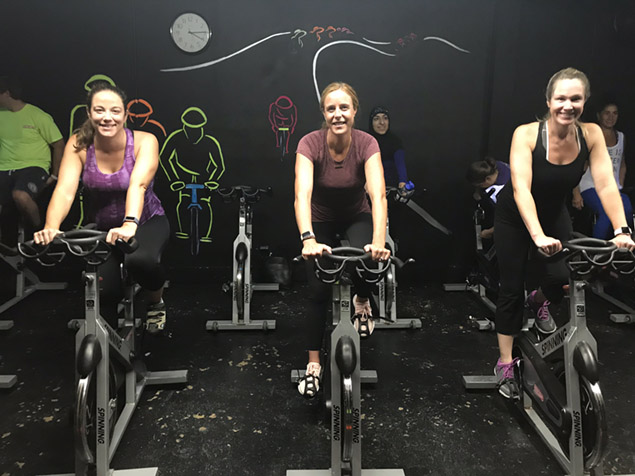 Expectant Moms Weigh In
Dr. Lisa Iucci is expecting her second child in early October. She said that in discussion with her physician during her first pregnancy she was advised that it was okay to continue the exercise regimen she had been doing but was advised not to pick up anything new. “The only real restriction is how you are feeling during exercise,” said Dr. Iucci. “Pay attention to what your body is telling you.”  She continued her normal exercise routine up until the day prior to going into labor in week 39. Although Dr. Iucci said she had nothing to compare it to, but one of her motivations for working out was to help during labor and during the recovery. “I do think it makes a big difference,” concluded Dr. Iucci.

Amy Riordan, MSN, APN is a family nurse practitioner with Shore Physicians Group in Ocean City and expecting her second child in January. She said exercising through her pregnancy was discussed and said her physician touched on the importance of remaining active during pregnancy. “It was encouraged to continue with my exercise routine during pregnancy but to avoid overexertion and not to push it if I ever dizzy or faint,” said Amy Riordan. Spin was not an every week event but she said mixing a spin class in with other exercise such as light weight lifting, running and elliptical was her routine. She is exercising through her pregnancy and with her first had planned a trip to the gym the day she went into labor, quickly scuttling any other plans. The family practitioner said she does think she was able to rebound quicker and return to her pre-pregnancy weight by remaining active throughout pregnancy.

Elizabeth Klein, PA-C is a physician’s assistant with Shore Physicians Group Surgical Division and expecting her third child in December. She participated in the recent spin class and said it is something she has done before but it is not her usual form of exercise. She discussed exercising with her physician during her first pregnancy and was told she could continue with her exercise and to listen to her body. During her first pregnancy she did Zumba, running, elliptical, and circuit training up to 36 weeks and walked daily thereafter. Currently she is doing high intensity interval training, elliptical and she continues running and circuit training. Like her colleagues Elizabeth Klein said she believes a combination of exercising while pregnant, a return to light exercise six weeks post-partum and breastfeeding helped return her body to pre-pregnancy state quickly.

For women who are expecting, times may have changed. “I think that old saying, ‘eating for two’ has been replaced with a much healthier model in women today who are pregnant. Education on diet and calorie requirements during pregnancy are more easily accessible and therefore women are aiming to have a ‘healthier’ pregnancy. I do believe the addition of exercise provides both physical and mental benefits before, during and after pregnancy,” concluded Elizabeth Klein.

Why Do I Feel So Anxious?