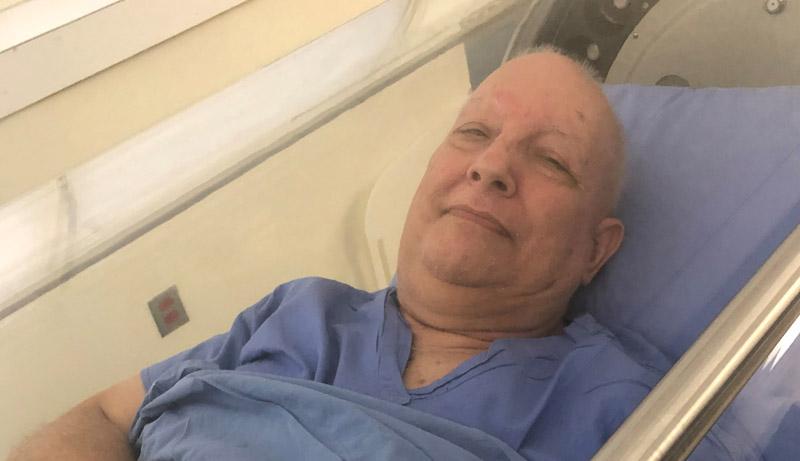 Kenneth Matthews says that age is just a number and at 70, he is ready to embark on a new adventure in his life, traveling the country in his 31-foot RV. But those plans to hit the road and enjoy the countryside would not have been possible several years ago.

For more than six months Kenneth Matthews of Egg Harbor Township battled a persistent wound on his right foot, near his little toe, diagnosed as a diabetic foot ulcer. The first treatment option was to try antibiotics but after several rounds of antibiotics, the wound failed to resolve. Matthews said his physician recommended him as a candidate for hyperbaric oxygen treatment at the Healogics Wound Care Center at Shore Medical Center with the goal of healing his open wound.

In the hyperbaric oxygen chamber the air pressure is increased two to three times higher than normal air pressure. Under these conditions, the lungs are able to gather more oxygen than would be possible breathing pure oxygen at normal air pressure. The blood then carries this additional oxygen throughout the body, helping to fight bacteria and stimulate the release of growth factors and stem cells which promote healing.

For eight weeks, two hours a day, five days a week, Matthews would come to the Healogics Wound Care Center at Shore for the hyperbaric oxygen treatment. “At the Wound Center all of the nurses and doctors were so understanding,” said Matthews. “They made a big difference in my treatment and in my life. If I had any questions, they answered them for me or checked it out and got an answer for me. Honestly, I loved all of the nurses, they were terrific.”

According to Healogics manager, Jane Weisbecker, the treatment protocol for Matthews included the hyperbaric oxygen, skin substitutions and weekly debridement of the wound. Matthews said he just took it day by day.  Matthews learned to put mind over matter and said, “Any pain or discomfort that I had, I was able to block it out mentally and persevere and I always knew they were doing everything they could for me.”

Matthews eventually had the little toe removed and the wound has resolved. It has been almost two years since Matthews was treated for his diabetic foot ulcer at Healogics Wound Care Center. While he hopes he does not need their services in the future he said, “I would go back there again, absolutely. I have a great deal of faith in everyone at the Wound Care Center and I have a great deal of confidence in Shore Medical Center.”