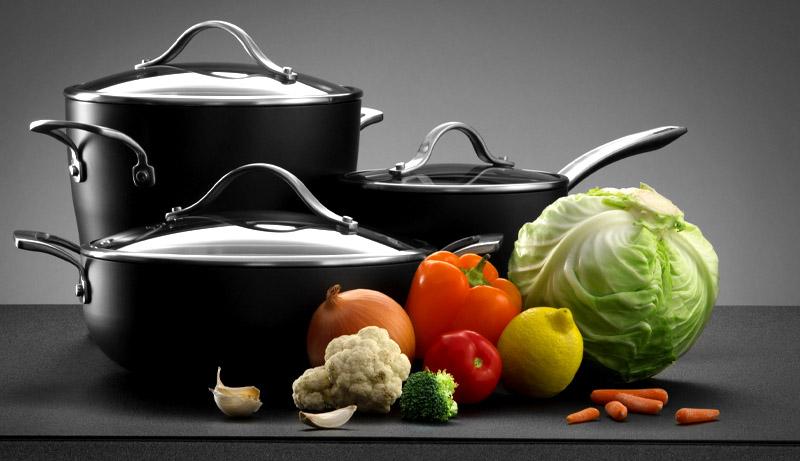 The one thing we all share is the fact that we cook and we eat. While what we eat is extremely important to our overall health, the cookware used to prepare the food may have a nutritional impact as well.

Cast Iron Skillets
Cast iron skillets are a favorite of many cooks and a must-have according to many food bloggers.  But aside from cast iron being an ideal heat conductor that heats evenly, the skillet will last a lifetime. When well-seasoned, a cast iron pan will be stick-resistant and require no additional oil.

Shore Medical Center Outpatient Nutrition Counseling Dietitian Mackenzie McCune, RD, says that cooking in cast iron pans adds iron to food. "Eggs scrambled in an iron skillet or spaghetti sauce simmered in an iron pot can double or triple the iron content of a meal. Using cast iron would be a great way to get some more iron into your diet if you find that you tend to run low, which is common for may women."

Teflon Pans
McCune weighed in on the use of Teflon pans and the concerns that the product releases toxins. They have been around for decades, but a newer formula for Teflon was introduced in 2013. McCune explained, "The Teflon coating found on nonstick cookware is typically harmless until it reaches very high temperatures. At extremely high temperatures of 500°F, Teflon will begin to break down, releasing toxic chemicals. It is important to note this is only when it is cooked at very high temperatures, so ways to prevent this is cooking on low or medium heat and not heating your empty pan before cooking. Doing this will prevent the pan from reaching 500 degrees or higher.

She suggested the following alternatives to Teflon coated cookware:

Copper Pans
While McCune admits that copper pans are probably the most aesthetically pleasing, she does not recommend cooking on it, even though it heats up quickly and evenly. "The main reason is because of leaching concerns – even though copper is usually lined, the lining will break down over time. Excessive intake of copper will cause a huge imbalance in the copper-zinc ratio needed for almost every system in the body. This imbalance can also cause acne, depression, eczema, headaches, and poor immune function."

Aluminum pans
Most people have at least a few pieces of cookware made of aluminum, including cookie sheets, pots and pans. Many are made with anodized aluminum, which is supposed to give them a natural nonstick finish. From a dietitian's perspective, is that a good thing or a bad thing? McCune recommended the anodized aluminum and added some advice for bakers. "I would suggest using parchment paper for baking. It allows even cooking and saves time on clean up," said McCune.

Air Fryer
The air fryer is very popular in the kitchen but is it a healthier cooking method? McCune advised, "Cooking in an air fryer helps keep food low in fat and calories yet also delicious, which makes them a healthy alternative to fried food. Air frying is also an easy way to roast some very healthy and tasty veggies such as Brussels sprouts."

The Multicooker
The new and popular combination cooking appliances, like the Ninja™ Foodi™ or the InstantPot, can be a pressure cooker, air fryer, and dehydrator all-in-one, but do they retain the nutritional value of the food? Addressing the dehydrating function, McCune cautioned to be mindful of the sugar amount in the dehydrated foods.

"The dehydrating process retains a food's original nutritional value. For example, apple chips will have the same amount of calories, fiber, sugar, etc., as the fresh fruit. However, because dried food loses its water content, it's usually smaller in size. Keep your portions of dehydrated foods smaller than what's recommended for the food in its natural form to avoid overeating. I would recommend no more than ¼ cup dehydrated fruit."

Air poppers
The air popper, a popular popcorn maker a few decades ago, has returned as a healthy addition to the kitchen to cut back on oil. But is it worth the counter space, or should we go for popcorn cooked traditionally in hot oil over a stove?

This one was an easy answer for the dietitian. "Forget the oil and reach for the air popper. Air popping is one of the healthiest ways to prepare popcorn because it does not involve oil, adding fat and calories. Prepackaged microwave popcorn and popcorn popped in oil both absorb some of the oils used in the popping process. The popcorn found at movie theaters is typically popped in coconut oil, and a large-sized popcorn at the theater may have as many as 60 grams of fat, according to a 2009 analysis conducted by the Center for Science in the Public Interest." The Food and Drug Administration recommends no more than 78 grams of fat daily based on a 2,000 calories per day eating plan.

Speak With the Dietitian
For help with your nutrition plan, schedule an appointment with a member of the Shore Medical Center Outpatient Nutrition Counseling Team by calling 609-653-4600.

Are You Up for a Heart Month Food Challenge?

Carbs Do Not Have to be Your Enemy