Measles diagnosed in North Jersey – Should you Be Concerned? 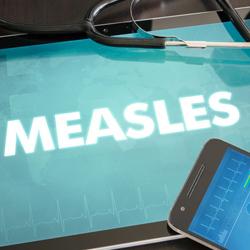 Thousands of New Jersey and New York residents learned they may have unknowingly been exposed to measles according to a report issued Oct. 13 by the New York Department of Health. A traveler returning from a trip to Israel was confirmed to have measles after being diagnosed at the Westchester Medical Center Emergency Room.

While our neighbors in North Jersey are the ones who need to be wary right now about exposure to the disease, the accidental exposure to measles is a reminder that all of us may need to revisit how up-to-date our vaccines may be.  Between Oct. 4 and Oct. 11 this traveler did normal, everyday things; he twice went to synagogue, went shopping at Costco, stopped at the gym, shopped at Wesley Kosher in Monsey, NY and finally checked into the Westchester Medical Center Emergency Room.

What to do in case of exposure to measles
According to Melissa Szarzynski, RN, Shore Medical Center Infection Control Manager, Shore Medical Center follows the Center for Disease Control protocol as it pertains to measles. Following the CDC guidelines, if an individual has been exposed to measles they should immediately contact their physician to determine if they are immune based on vaccination record, age or laboratory evidence. The physician will make special arrangements for evaluation if needed without putting other patients or medical staff at risk.

For those individuals not immune to measles, the MMR vaccine or the medicine immune globulin may help to reduce the risk of developing measles. The physician can help advise and monitor for signs and symptoms of measles. In keeping with the CDC precautions for measles, those who have been exposed and did not get the measles-mumps-rubella (MMR) or immune globulin, they are advised to stay away from settings where there are susceptible people such as schools, hospitals or childcare facilities until the physician gives the green light to return. This helps to ensure the person exposed does not spread the measles to others.

Are you protected against measles?
Szarzynski again referenced the CDC guidelines to advise those individuals who are unsure if they are protected against measles. They should have records that they received two doses of the measles containing vaccine for school-ages children (grades k-12) or an adult who will be in a setting with high risk for measles transmission including students at post high school education institutions, healthcare personnel and international travelers. Those protected who have received one dose of the measles containing virus are preschool-aged children or an adult who is not in a high risk setting for measles transmission. Those also protected are those individuals that have been confirmed via laboratory testing that they are immune to measles, have had measles at some point in their life or were born prior to 1957.

If an individual is unsure if they are immune to measles, try to find your vaccination records or documentation of measles immunity. If there is no written documentation Szarzynski reminds patients, in accordance to the CDC, get vaccinated with the MMR vaccine. The other option is to have a doctor do a blood test that will determine whether the patient is immune. The Infection Control Manager added that the blood test is likely to be more costly and will require two visits and added that there is no harm in getting another dose of the MMR vaccine.

According to Patricia Diamond, Atlantic County Div. Dir. of Public Health, measles is a very contagious respiratory disease that is caused by a virus. It is a common childhood disease and is considered the most deadly of all the childhood rash/fever and illnesses. It is spread easily from person to person and of those not vaccinated, 90 percent will come down with the virus.

In accordance with CDC guidelines provided by Diamond, when an infected person talks, coughs or sneezes the virus is released into the air and enters the body through nose, mouth or throat. People can get sick just from coming into contact with the mucus or saliva of an infected. The virus remains alive in the air and on surfaces for up to two hours.

While confirmed cases of measles are rare in the United States, there are some that pop up. In 2015 there was a large, multi-state measles outbreak linked to an amusement park in California. According to the CDC the outbreak likely started from a traveler who became infected overseas with measles, then visited the amusement park while infectious; however, no source was ever identified. Analysis by CDC scientists showed that the measles virus type in this outbreak (B3) was identical to the virus type that caused the large measles outbreak in the Philippines the year prior. According to the most recent CDC records as of September 8, 2018 there have been 134 cases of the measles confirmed across 24 states and the District of Columbia since January.

Diamond said vaccination is important for people of all ages because it protects the person receiving the vaccine and helps prevent the spread of disease to others who are unable to receive them. Infants and young children, the elderly, and those with chronic conditions and weakened immune systems are particularly vulnerable.