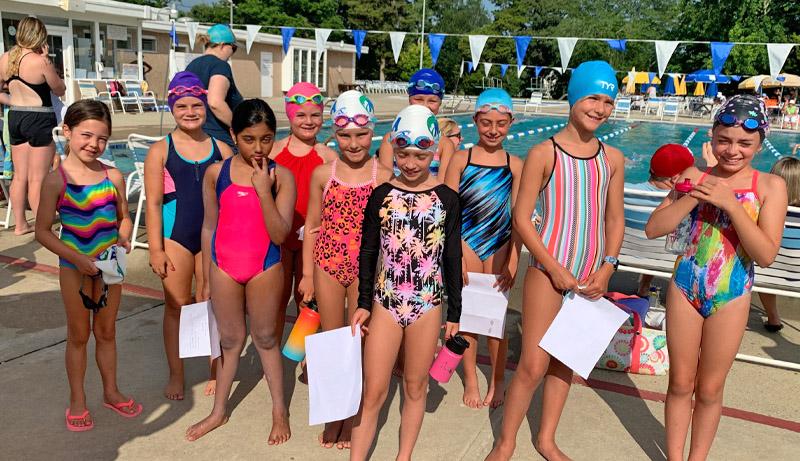 Excited about their upcoming lap swim to raise money for the Carol Schiavo Kids Swim, the eight and nine-year-old-girls are ready for the challenge, Tuesday, July 13.

Members of the Auxiliary of Shore Medical Center took their places early July 13 on the pool deck at the Mainland Recreational Association Swim Club. Their mission? To count the number of laps swam by the MRA’s youth swim team members during the 39th annual Carole Schiavo Kids Swim for Health. This year, 101 swimmers ages 5 to 18 completed 7,125 laps. Swimmers raised the majority of the $10,565, along with support from local sponsors.

The event began in 1982 as the Kids for Kids Swim-A-Thon, which originally funded special pediatric projects at Shore Medical Center. The first-year swimmers raised $8,500, and to date, the group has raised over $300,000, with proceeds now going toward cancer care at Shore. The event was renamed in memory of longtime Auxiliary member Carole Schiavo. In 1989, the American Hospital Association selected the event as one of the top ten fundraising ideas in the United States by the American Hospital Association.

Swim team members Billy Jenkins and Mackenzie Jenkins raised the most through pledges, each bringing in $450. The swimmer completing the most laps was Leah Nirenberg, who swam 130 laps.

Help Bring the Best in Radiation Therapy to Shore