Is the Spice Cabinet the New Medicine Cabinet? 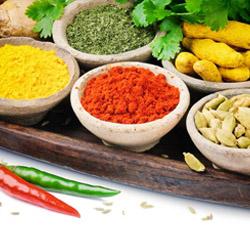 Herbs and spices have often been touted as an easy way to add flavor while helping to reduce the amount sodium used in dishes. While this is an important benefit, there are additional powerful health benefits of herbs and spices. Turmeric and cinnamon are two spices that have been getting some attention recently. Let’s explore them and see if all the health claims hold true.

Turmeric
Turmeric is a root that looks very much like a skinny version of ginger. Most people identify turmeric in its ground powder form sold in spice jars. Turmeric is most often used in South Asian cooking and has also been used in Ayurvedic medicine. The health-promoting benefits of turmeric come from a group of compounds called curcuminoids. The most active and beneficial curcuminoid and the curcuminoid that gives turmeric its yellow color is curcumin. Research findings suggest that curcumin helps regulate chemical messengers that cause inflammation. In addition to its anti-inflammatory properties, curcumin also has anti-tumor and antioxidant effects. While curcumin can be found in a powder or supplement form, it is important to note that taking large doses of turmeric or curcumin may result in side effects such as nausea, vomiting, and diarrhea. It is also important to remember the supplements are not regulated or evaluated for safety and efficacy, so there’s no telling what is actually in the supplement bottle you are purchasing. Additionally, high levels of turmeric may potentially inhibit blood clotting. Small amounts of turmeric regularly used in cooking do not cause issues.

Cinnamon
Cinnamon actually comes from the inner bark of trees. Cinnamon can be found in “stick” form or as a ground powder. The compound that gives cinnamon its smell and flavor is cinnamaldehyde. Cinnamaldehyde is also believed to be responsible for cinnamon’s potential health benefits. Cinnamon is believed to contain antioxidants with strong anti-inflammatory properties. Limited research has also found that individuals taking cinnamon regularly had reduced levels of total cholesterol, LDL (bad) cholesterol, and triglycerides. The biggest buzz around cinnamon, however, is the possibility of its role in helping lower blood sugar levels in people with diabetes. Cinnamon may interfere with digestive enzymes that breakdown carbohydrates in your digestive tract, thereby slowing down how quickly the sugars get into your blood. Additionally, cinnamon may aid in glucose uptake into the cells. Some human studies have shown that individuals taking cinnamon had lower fasting blood sugars.

So, is the spice cabinet the new medicine cabinet? Not necessarily. It is important to note that the majority of studies evaluating the potential health benefits of spices have been conducted in lab rats. Additionally, the limited number of human studies need to be replicated at larger scales to verify previous results. Study design, protocols, dosing, number of participants, and other details of a study also have to be taken into consideration.  There are also differences in lifestyle, genetics, medications, and other demographic differences that may impact study results.

So, what does this all mean? The best way to reap the potential benefits of any spice or herb is to incorporate it into your cooking routine rather than looking for it in a supplement form. Add some turmeric to a savory dish or sprinkle some extra cinnamon into your oatmeal for both the added flavor and the possible health benefits.

Pep Up Your Summer Produce with These Pointers

Prebiotics, Probiotics: Does Your Gut Really Need Them?