Is Your Sleep Tracker Keeping You Up at Night? 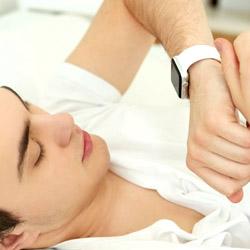 Technology is great, with gadgets to give us feedback on everything from the world around us to the body we live in. But for some who use a sleep tracker to monitor their level of sleep, the obsession with the feedback from their tracker may be causing them additional stress and sleepless nights. That stress and obsession is a real thing, called Orthosomnia that according to the Journal of Clinical Sleep Medicine is defined as “A perfectionist’s quest to achieve perfect sleep.”

Fitness trackers
According to the manufacturer, Fitbits and other wearable devices are designed to do many things besides just tracking steps. One is to monitor sleep automatically and set a silent alarm. The device syncs with the app so the wearer is able to monitor how many “sleep disturbances” they have had, see how long they have slept, track sleep patterns, get a better night’s sleep, and wake the wearer up with a gentle nudge on their wrist from their vibrating device. For most people it is helpful to keep track of patterns but for some, the desire to achieve the optimum goal becomes a bit of an obsession to get better sleep is keeping them awake.

John Keeley, Clinical Educational Specialist with Persante Health Care and the Shore Center for Sleep Medicine said, “Obsessing about not getting enough sleep is not conducive to getting to sleep.”

How sleep is measured
The manufacturer of sleep monitors, such as a Fitbit, estimates sleep stages using a combination of movement and heart-rate patterns. If the wearer does not move for an hour, the tracker assumes they are asleep. Length of time of movements, such as rolling over, are indicative of sleep behavior and help to confirm the wearer of the sleep monitoring device is asleep. While sleeping, the device tracks heartbeat changes that are known as heart rate variability which fluctuates as the individual transitions between light, deep and REM sleep stages.  In the morning when the device is synched with the app, the heart rate patterns and movements are used to estimate the sleep cycles of the previous night.

While that might be a general guideline of sleep behavior for some, those individuals with Orthosomnia will be checking their numbers when they get up to make sure their overnight numbers stack up to what is considered not just the optimum length of sleep but also the length of each phase and the number of restless and interrupted periods during the night. According to the Journal of Clinical Sleep Medicine, individuals with Orthosomnia will stress if they are not reaching the recommended sleep benchmarks, sometimes so much so that it will keep them awake at night.

Sleep stages
The National Sleep Foundation (NSF) defines the sleep stages. Light sleep serves as the entry point into sleep each night as your body unwinds and slows down. This stage typically begins within minutes of falling asleep. During the early part of light sleep, drifting between being awake and asleep, the person may be somewhat alert and can be easily awoken. Breathing and heart rate typically decrease slightly during this stage.  NSF indicates that light sleep promotes mental and physical recovery.

Deep sleep typically occurs in the first few hours of sleep. When you wake up feeling refreshed in the morning, you’re likely to have experienced solid periods of deep sleep during the previous night. During deep sleep, it becomes harder to be awakened since your body becomes less responsive to outside stimuli. Breathing becomes slower and muscles relax while heart rate usually becomes more regular. Adults may see a normal decrease in deep sleep as they age, though sleep patterns vary among people. Information from NSF indicates that deep sleep promotes physical recovery and aspects of memory and learning. This stage has also been shown to support the immune system.

The first phase of REM sleep typically occurs after an initial stage of deep sleep, according to NSF. Generally a person will stay in REM sleep for a longer period of time during sleep cycles occurring in the second half of the night. During this final stage of sleep, the brain becomes more active and dreams will mainly occur during REM sleep, eyes move quickly in different directions, the heart rate increases and breathing becomes irregular. Research has been shown to play an important role in mood regulation, learning, and memory as the brain processes and consolidates information from the previous day so that it can be stored in your long-term memory. According to Keely, REM sleep is like a re-boot for your brain.

Keeping that Good Circadian Rhythm
Keeley added that he understands that individuals like to keep track of their activity level, including sleep but that said, “Accuracy is questionable at best, even when heart rate is being captured. The best thing to do to ensure a good circadian rhythm is to keep a regular sleep schedule, even on weekends. If still tired after a full night sleep, there may be an underlying sleep disorder that would need testing to determine and treat. As always, concerns about fatigue or difficulty with sleep should be discussed with a physician. Board certified sleep physicians, like Dr. James O’Connor, are also available and specialize in helping patients manage their difficulty with sleep.”

Symptoms of a sleep disorder include: Feeling tired even after a full night's sleep, falling asleep at inappropriate times such as while driving or watching TV, frequent headaches, snoring, waking up with a choking or gagging sensation, pauses in breathing while asleep, inability to sleep. If you are experiencing the symptoms above, contact Dr. James J. O’Connor of Shore Physicians Group at 609-927-1450 or the Shore Sleep Center at 855-633-6818.

Boosting your immune system with a good shot of sleep

Good Health Can be a Balancing Act

Is Proper Sleep an Rx for COVID-19?