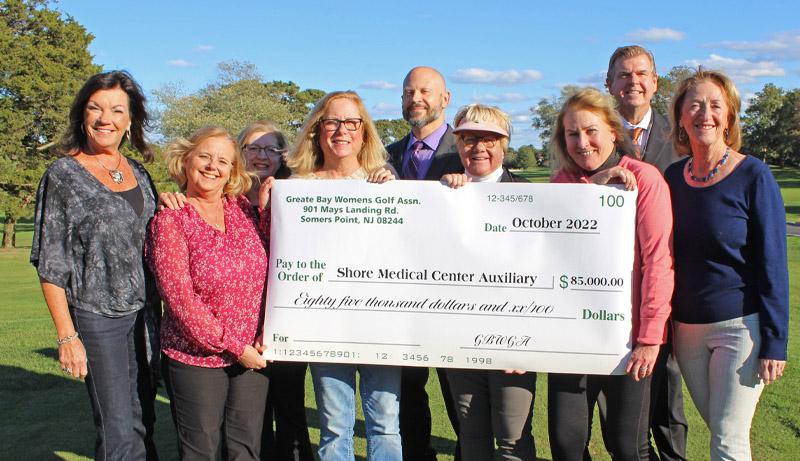 The Greate Bay Women's Golf Association presented a check for $85,000 to representatives from the Auxiliary of Shore Medical Center and Shore Cancer Center October 19.

The Greate Bay Women's Golf Association (GBWGA) once again stepped up in a big way to help local women who are undergoing cancer treatment at Shore Cancer Center. Through their annual Swing Golf Tournament held September 29 at Greate Bay Country Club, the GBWGA raised $85,000, which they presented to the Auxiliary of Shore Medical Center on October 19. All the funds raised will help offset the medical expenses of local women battling cancer at Shore Cancer Center.

"We hit it out of the park this year, and because of everyone's hard work, we raised the most money in the five years of our Swing tournament," said Pat Cowan, chairperson of the Swing Golf Tournament committee. The 2022 Swing Tournament was the first as chairperson for Cowan. She took over that role in honor of the tournament's founder - her wife and partner of 23 years - Sue Webb, who passed away in July 2020.

"Sue would be so proud of what the Greate Bay Women's Golf Association accomplished and how the funds raised will be used to alleviate some of the financial burdens of women who are treated at Shore Cancer Center. I know she is up in heaven, looking down at us with tears of joy in her eyes," shared Cowan.

All of the GBWGA members are actively involved in helping to make the tournament a success, through cash donations, volunteerism, golfing, and support of the auction. While a handful of members serve on the Swing Tournament Committee, it is the entire GBWGA that makes this event happen.

The Auxiliary of Shore Medical Center held their annual Tree of Lights ceremony on Wednesday, December 7, 2022, where they recognized the medical center’s Plant Operations team for keeping patients, visitors and staff safe and for the support they provide the Auxiliary. The Tree of Lights program enables members of the community to honor or remember family and friends with a donation in support of the medical center.