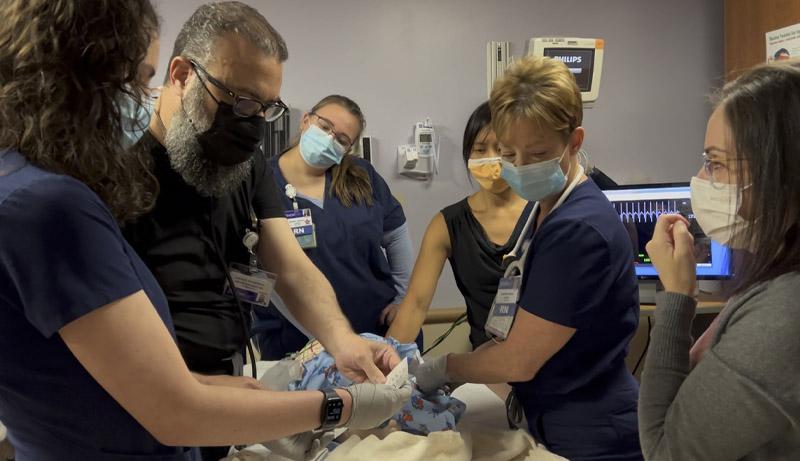 On the morning of May 18 in Shore’s Pediatric ER, a mother watched worriedly as a crowd formed around her toddler, who was having a seizure that wouldn’t stop. Nurses shouted out his vital signs while Shore pediatrician Hatem Elhagaly, MD, FAAP, asked the mother questions to help him develop a plan of care. He then swiftly directed the medical team to bring him the proper medication and dosage to stabilize the child.

The child they were caring for was not an ordinary child, however. It was a lifelike pediatric high-fidelity simulator that could breathe, blink and cry. It was all part of a pediatric emergency simulation exercise to help Shore’s ER team practice how they work together in a critical pediatric emergency.

The simulation exercise is part of a collaboration between the New Jersey Department of Health, the Emergency Medical Services for Children (EMSC) program, and the Children’s Hospital of Philadelphia. EMSC is a national initiative to improve pediatric emergency care in every state and territory in the U.S. EMSC has adopted the ImPACTS (Improving Pediatric Acute Care Through Simulation) model, developed by pediatric emergency medicine physicians from Yale University, that uses simulation exercises to help improve the care of critically ill and injured children in emergency departments.

The three emergency scenarios included the seizure, a child with an obstructed airway, and a child in septic shock. The staff could hear heart, lung and gastric sounds and do anything to the ‘patient’ that they could do to an actual child - even insert an IV and run fluids.

The simulation scenarios were run and facilitated by CHOP ER physicians Dr. Yen Tay, who acted as the child’s mother during the simulations, and Dr. Megan Lavoie. Gary Ackerman, Learning Lab Coordinator with Virtua’s Mobile Intensive Care Unit, supplied all of the simulation equipment, operations and technical expertise during the exercises.

After each simulation experience, Shore’s ER staff debriefed with Dr. Tay and Dr. Lavoie. The physicians asked staff how they felt about their performance in the simulation and what they’d do differently, challenging them to develop even better ways to respond in critical situations.

Monica Headley has been a nurse for about one year. She started at Shore on the 5 Stainton medical-surgical unit but joined the adult ER team six weeks ago. She’s still in her orientation phase, and the simulation was her first real experience in a pediatric scenario.

“As a new ER nurse, this experience made me feel confident that when we have a major medical emergency or a patient goes into cardiac arrest while we’re treating them, we will be able to do this,” Headley said. “I was impressed by how well everyone coordinated. I thought it might be chaotic, but everyone jumped in and found their role quickly. There was very clear communication.”

Eric Hicken, CPM, EMT-P, is the Chief of Emergency Medical Services for Children’s Programs and Special Projects with EMSC, within the N.J. Department of Health. He said this was his program’s first pediatric emergency simulation since the pandemic. Eric was very impressed with how Shore’s staff performed.

“They really worked well as a team and were a cohesive unit. We were thrilled with the number of clinicians who participated,” Hicken said.

Hicken also remarked on how supportive Shore has been of this program. “Carolyn Gattuso, clinical liaison with Shore’s ER, was the one who reached out to me asking when we would be bringing simulations back. We’ve been to Shore several times over the years, and they have always been a great supporter of our EMS for Children program.”

Sherri Richmond, Director of Emergency Services at Shore, said these simulations are always a great learning experience for the team.

“The simulations allow us to practice team communication, replicate clinical practices and apply our skills and knowledge. Debriefing with the program leaders afterward promoted critical thinking and allowed staff to receive immediate feedback on how they performed.”

Excited about their upcoming lap swim to raise money for the Carol Schiavo Kids Swim, the eight and nine-year-old-girls are ready for the challenge, Tuesday, July 13.